A class that was in charge of most of the major expresses on the WCML.Now replaced by Pendolino's.Most have now been exported to Bulgaria for further use.A few remain in this country in preservation. 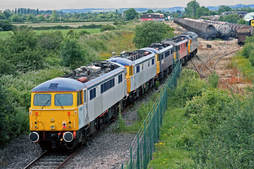 Cotswold Rail Class-47 47828 'Joe Strummer' hauls four redundant Class-87's into Long Marston for storage and eventual refurbishnent for re-use in Bulgaria-Eastern Europe where over ten years later they continue to give reliable meaningful service.From back to front they were 87007/87008/87006 and 87026. The 47 is no longer mainline registered in the UK and is now preserved,currently at Meldon in Devon. 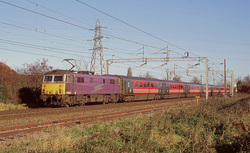 87002 towards the end of its mainline career on frontline services on the WCML was given a makeover by its owners 'Porterbrook Leasing'.The livery being the corporate purple used by that company.Several locomotive types got a dose of this purple colour scheme including  two 47's/57601 a Deltic and this 87.The locomotive at this time running un-named is seen pushing towards Euston at Tilehill with a working from Birmingham.To see the other side of this engine with its different livery variation click HERE. 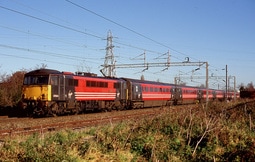 87004 'Britannia' powers northwards through Tilehill on the WCML with        one of the few remainig diagrams booked to loco haulage by this                  time.Most duties having now been taken over by Pendolino's.The working    is a Euston to Birmingham shuttle.This loco lasted for another 6 months        before being consigned to store.However that was not the end of the            story.It was exported in November-2009 to Bulgaria and continues to do      useful work there.What a sad indictment of the state of today's UK rail          scene!!!!!!! 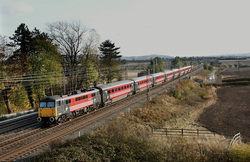 87029 'Earl Marischal' is seen pushing its Mk-3/DVT set towards Euston at Ledburn south of Leighton Buzzard. This was towards the end of LCHS on the WCML and within 6 months this engine was consigned to storage.However after 5 years in 2009 it was overhauled and returned to service.Regretfully that was to be in Bulgaria of all places! So 17 of the original fleet of 35 Class-87's are still in regular service there.We live in strange times,no wonder this Country is almost bankrupt giving away perfectly servicable multi-million pound assets for little more than scrap value! 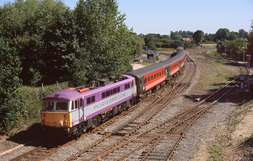 87002 is now preserved and one of the few 87's still left in this country.Here it is in its purple-phase with 'Porterbrook' written large on its flanks.The working is a southbound 'drag' from Birmingham as far as Nuneaton.From here the DVT/87 combo would take the train onwards to Euston.On this occasion the drag-engine was 47840.The location is Whiteacre Junction nr Hams-Hall. 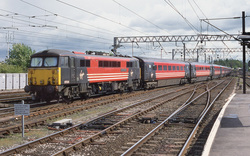 One of Virgins Finest! 87031 'Hal o' the Wynd' pushes away from Carlisle-Citadel heading south for Euston.This loco was scrapped at EMR-Kingsbury in 2010 thus becoming one of the few members of the class not exported for further use abroad.

87028 'Lord President' speeds non-stop through Stafford bound for Euston.At this time these were the mainstay of the WCML services.Now all either preserved/scrapped or exported abroad to Bulgaria for further use as nobody wanted them here in the UK. 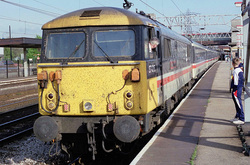 A warm summers evening (Remember those?) picture at the north end of Stafford Station on the WCML. 87015 'Howard of Effingham' displaying a healthy splattering of dead insects stands ready to depart.This loco had a life of just 31 years,ending up being scrapped at MOD-Caerwent by JT Landscapes!   No lucky escape to Bulgaria for this one then!