Sulzer Bo-Bo Type-2 that lasted on the mainline network until 1987.20 are in preservation from a total of 327 built. 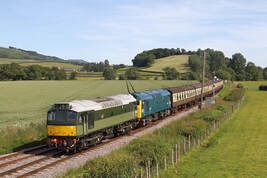 The 15:51 from Bishops Lydeard to Minehead rolls into Williton this time with the 2-Tone Green D7612 leading and BR-Blue D7535 tucked inside. 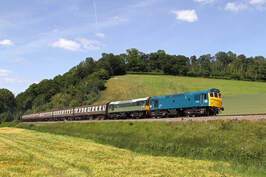 Class-25 pairing D7535 & D7612 pass Castle Hill just south of Williton with the 15:15 from Minehead going to Bishops Lydeard.I treked all the way up the Minehead to picture this duo departing there but as has so often been the case today I was 'done' by the clouds.Unbelievably it took 75 minutes to get here for this 2nd more successful attempt.I only took 20 minutes to get here so I had a 55 minute wait before it appeared! 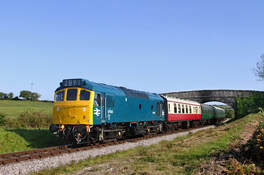 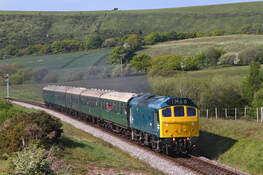 A close second to being the Star of the Gala is D7535 in its suberbly presented condition.Here it is in the seemingly mountainous region of the Isle of Purbeck crossing Corfe Common on yet another trip to the sea at Swanage. 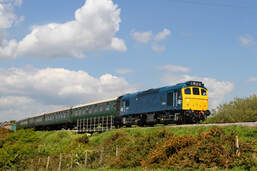 D7535 now looking much more like the real thing since a recent repaint from the incorrect shade of blue livery acquired during its time on the Dartmouth Steam Railway rolls around the bend towards Harmons Cross at Woodhyde. 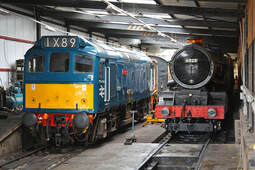 A glimpse inside the Torbay & Dartmouth Railway running shed at Paignton.D7535 'Mercury' sits with GWR King-Class 6023 'King Edward II' which has recently arrived here (June-18) for some running experience.Since it was restored at Didcot in 2011
its projected return to the mainline hasn't happened and it will now see out its current boiler-certificate on heritage railways instead. 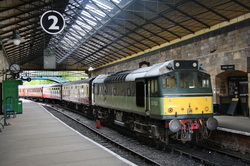 This loco was withdrawn in 1987 after only running in BR service for  just 18 years.It ended its career then numbered as 25278.Now 27 years later it continues to give reliable service now restored to original 2-tone green and numbered as D7628. Here it has just arrived at Pickering on the N-Yorkshire Moors Rly with the 15:40 from Grosmont.Note the superb re-instated overall roof here at this station. 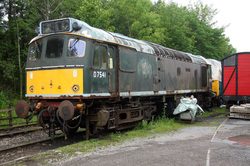 25191 or if you prefer D7541 seen in the state it arrived in recently from the NYM-Rly at Buckfastleigh on the Dart-Valley Railway. Largely ignored in Yorkshire a full program is in place to restore this engine here at Buckfastleigh..........
The Full Information can be found  HERE  the owning groups website... 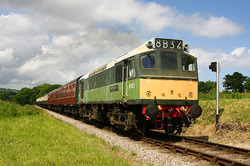 Small Sulzer D7523 seen at Leigh Woods on the West Somerset Rly with a morning service from Minehead going to Bishops Lydeard.Regretfully in September 2011 this engine moved on to pastures new.Going to the Epping&Ongar Railway where, as an already fully working loco will be an extremly useful asset.

The former D5200 by now numbered as 25050 is seen performing ECS work at Crewe.I managed an afternoon there whilst on a Training Coarse at Stone whilst working for BT.The lecturers had a strike so an afternoon trip to Crewe from Stafford for a few pictures seemed like a good idea!  25050 ended its days down south at Swindon-Works in 1983 during the massive cull of practically all the Class 25's.