Introduced in 2006 and operated by 'First Pennine Express'.A total of 51 3-car sets are in service.They were built by Siemans in Germany. 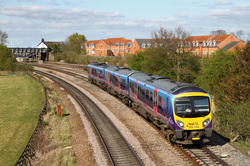 Trans-Pennine Express Unit 185145 takes the Leeds route south of Church Fenton with '1P51' the 15:28 from Middlesborough going to Manchester-Airport.This picture was taken from a superb old pre-nationalization footbridge which will shortly be replaced when this route to Leeds from Colton-Junction is electrified.Work is already in progress replacing various road bridges between here and Colton. 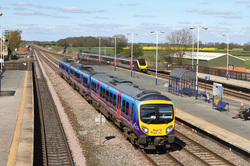 Trans-Pennine Express Unit 185142 speeds non-stop through Church-Fenton on '1F70' the 14:06 from Newcastle heading for Liverpool. 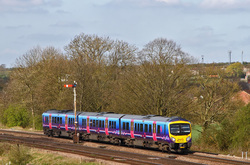 '1B68' the 07:53 from Manchester-Airport has just restarted this working away from its Barnetby Station stop.185137 is pictured from the hills in between there and Melton Ross.A fairly long walk of about a 3/4 mile was necessary to record this scene. 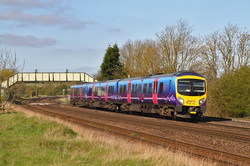 185133 operated by First-TPE motors under the footbridge at New Barnetby on '1B66' the 06:55 from Manchester-Airport going to Cleethorpes. 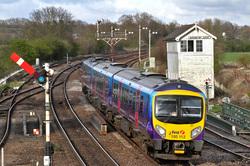 185112 on '1B89' rolls into Barnetby going to Manchester-Airport from Cleethorpes past the upper-quadrant signal on the end of the station here which is in the 'off' position signifying an approaching train from the west. 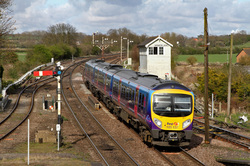 The 16:26 from Cleethorpes going to Manchester-Airport '1B87' runs into Barnetby for its booked stop with 185137 doing the duty.The old wooden signalbox Barnetby-East and a selection of the semaphore signals it controls forming the backdrop.By the end of the year all this old signalling equipment is due to be swept away as the entire local area including this Box and Wrawby-Junction a mile further west are set to be superceded by colour-lights-etc.Picture them whilst you can! 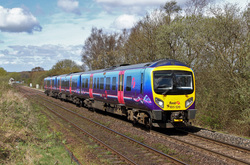 First-Trans Pennine Express service '1B74' the 10:55 from Manchester-Airport heading for Cleethorpes pass Elsham.185126 was doing the duty.At this location the line passes under the M180 with Elsham Crossing in the distance. 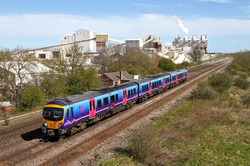 185148 speeds down the main line here at Singleton-Birch nr Melton Ross with '1B77' the 11:26 from Cleethorpes heading towards Manchester Airport.The massive Lime Works there forming the very industrial background. 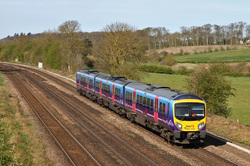 'First Trans Pennine Express' 185148 motors through Melton Ross with '1B68' the 07:53 from Manchester-Airport going to Cleethorpes.These Units carry the style of livery that was also originally intended for use on the FGW fleet of HST's that operate out of London Paddington.Indeed the first pair of MTU modified Class-43's  43004/43009 plus a single set of coaches were turned out in this style.Regretfully probably due to cost considerations this style was abandoned to give way to the boring budget version that is in universal use now on the FGW routes in the south. 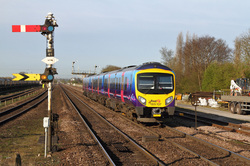 Trans Pennine Express operated by 'First' approaches Barnetby from the west.185137 is doing the 07:12 from Sheffield heading for Cleethorpes as '1R92'.All these superb semaphore signals here are set to be replaced within the next 8 months. 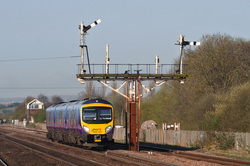 First-TPE's 185137 going to Cleethorpes from Sheffield as '1R92' passes under a superb old gantry signal on the approach to Barnetby.In the distance can be seen the still operational SignalBox at Wrawby-Junction.It is now only a matter of months now before all this fine old signalling equipment is swept away in the name of progress----Whatever that is? 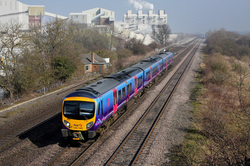 'Trans Pennine Express' formed by 185149 speeds past the Lime-Works east of Barnetby with '1B77' from Cleethorpes(11:26 off) going to Manchester-Airport. 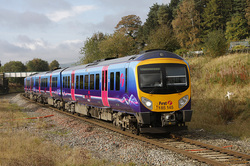 Trans-Pennine Express operated by 'First' uses these '185' type units not seen in the south of the country.Here is 185145 running non-stop through Chinley with '1B72' the 09:55 from Manchester-Airport heading for Cleethorpes.Note these units use the 'dynamic-lines' styling initially tried out on a FGW-HST set and 43004/43009 but not perpetuated on the rest of the fleet. 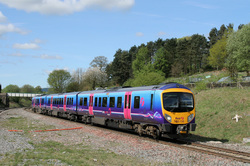 Wearing the livery style that was tried of FGW-HST's 43004 and 43009 and a few coaches but was then not proceeded with Trans-Pennine Express Unit 185138 speeds through Chinley with '1B72' the 09:55 from manchester-Airport to Cleethorpes.I was actually there awaiting a stone train heading for Peak Forest so this shot made a seemingly nice prelude.In fact it never turned up! No RTT in those days to keep you informed! 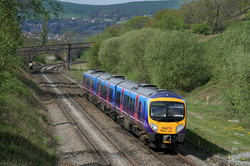 'First' Pennine Express '1B72' working from Manchester-Airport (09:55) going to Cleethorpes is seen approaching Chinley.Unit identity is 185140.In the backgroud is the well known 'slanty' double arch bridge that used to span a 4-track section through here until it was rationalised. 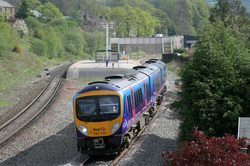 Trans-Pennine Express 185115 speeds non-stop through what is left of Chinley Station with '1B71' the 08:26 from Cleephorpes going to Manchester Airport.