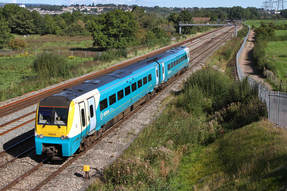 'Coradia' Class-175 number 009 cruises through a sunny Duffryn nr Ebbw-Junction with '1V36' the 07:30 from Manchester-Piccadilly to Carmarthen.This location has been temporarily transformed during the rebuilding of the bridge here in readiness for the electrification of this line opening up a few locations for a while.Of course when that 'mess' is installed this line with be ruined photographically just like the top-line through Shrivenham and Swindon. 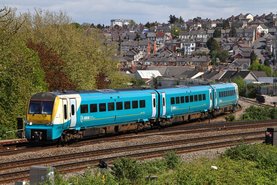 ATW's 175106 comes over Maindee West Junction off the Welsh Marches route with '1V70' the 09:30 from Manchester-Piccadilly to Cardiff-Central.In the background this rather densely populated area of Newport is known as Barnardtown. Altogether 27 of these Class-175's were manufactured,10 being 2-car with the rest as 3-car as seen here. 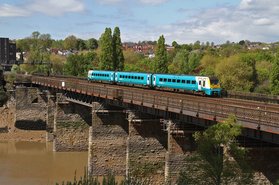 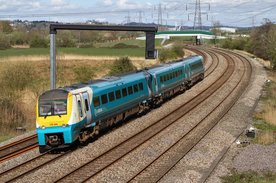 Coradia 175108 leans through the bend at Duffryn shortly after leaving Newport with the ATW service '1V12' from Manchester-Piccadilly (10:31 off) to Milford Haven.Note the signal gantry and also the bridge in the background.Both have been engineered to allow the OHLE to be installed eventually.No concession to design or elegance whatsoever in either of these ugly structures! 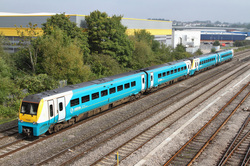 175008 and 175001 work a strengthened '1V36' service from Manchester-Piccadilly (07:30 off) to Cardiff-Central.Like every other train along this route to Cardiff today it was full to standing.  Apparantly chaos was ruling in Cardiff and particularly in Paddington with people trying to get to the welsh capital for the Rugby!
Where are you now 14 coach loco hauled jumbo trains???????? 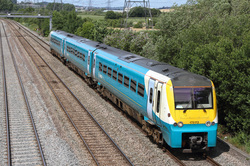 3-car variant of the 'Coradia' style of DMU No-175113 rolls unusually down the slow line at Duffryn between Newport and Cardiff with '1V95' the 10:40 from Holyhead going to Swansea. 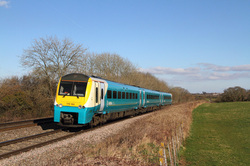 3-car 'Coradia' 175103 speeds through St Georges nr Cardiff going to Milford-Haven with the 13:08-1/2 from Crewe,'1V42'.The Manchester-Piccadilly to Crewe section of this journry was cancelled,hence the cranky Crewe start time! 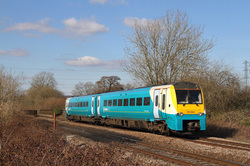 'Coradia' type-DMU 2-car 175004 rattles through Pontsarn with the 13:02 from Camarthan '1W17' which got only as far as Hereford.The train should have gone all the way to Manchester-Piccadilly but was jacked at Hereford due to an issue with the train crew! 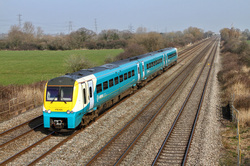 Long distance Arriva Trains-Wales service '1V94' the 08:05 from Holyhead heading for Cardiff has already taken over 5 hours to get this far.Mercifully only another few minutes remain for this journey.Coradia type 3-car 175109 was doing this rather extended journey.It is seen passing Coedkernew heading west. 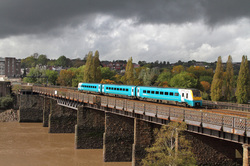 Arriva Trains-Wales 3-car 175106 rolls over the River Usk Bridge on the approach to Newport Station with '1V95' the 08:20 from Holyhead going to Cardiff Central.The sky was looking particularly angry.However after this patch of storm clouds had passed conditions improved remarkably to rescue a day which up to now was a bit of a disaster! 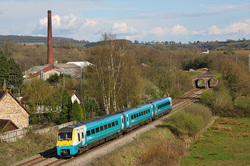 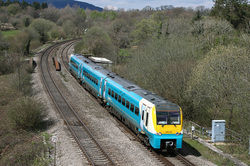 '1W25' from Milford-Haven going to Manchester-Piccadilly sweeps through Misken west of Cardiff.175110 is a 3-car version of the Coradia family of DMU's.27 train-sets were constructed in all between 1999 and 2001.11 are 2-car and 16 run as 3-car.All now operate with Arriva Trains Wales. 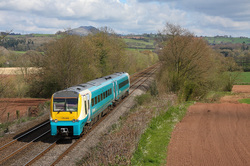 '1V53' the 06:35 off Holyhead going to Cardiff motors down past Llanover shortly after departing Abergavenny.A rather basic 2-car 175008 being deemed sufficient to cope with the passenger numbers on this route. 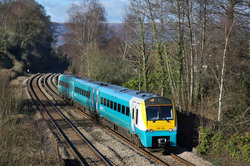 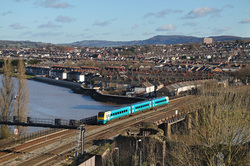 175104 crosses the Usk River with '1V75' from Manchester-Piccadilly going to Milford-Haven as it slows for the Newport stop.At least the Arriva-Trains-Wales colour scheme stands out well in the bright morning sunshine. 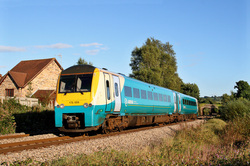 'Coradia' 175006 powers up through Ponthir with '1W89' the 17:21 off Cardiff going to Holyhead. The loco hauled service has since the timetable change on the 17th (yesterday) been retimed and now departs Cardiff 2 hours later than its original depart time...This means no more shots here at Ponthir at least until next spring due to the Autumn low light and the long long shadows. 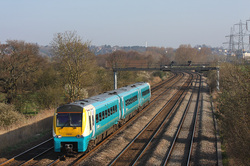 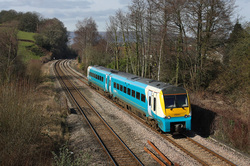 '1V55' from Holyhead going to Cardiff passes Ponthir north of Newport..The track conveniently widens here due to the road bridge being a double brick arch.'Corradia 175003 was operating this long distance DMU service. 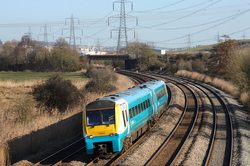 'Corradia' 175011 takes the sweeping bend at Duffryn shortly after departing Newport with '1V73' from Manchester-Piccadilly heading for Milford-Haven. 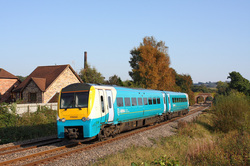 Arriva-Trains-Wales Corradia 175002 motors up through Ponthir with the 13:08 from Milford-Haven going to Manchester-Piccadilly.Superb light for this one but 20 minutes later when the 57+coaches to Holyhead was due a cloud (the first one for 3 days!) ruined the setting.30 seconds after it had passed the sun re-appeared and stayed out  a further 2 days until sunday.
Such is life!!!!!!! 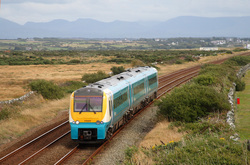 175107 passes Valley on the western-end of Anglesey with the 11:21 from Cardiff to Holyhead.Despite being 30 miles away the Mountains of Snowdonia on the Welsh-Mainland are still very much in evidence. 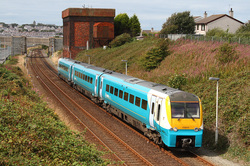 The 14:32 Holyhead to Cardiff service seen shortly after departure from the Terminus at Holyhead.Unit-175111 wearing Arriva colours doing the duty. 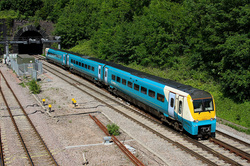 175111 exits Gaer Tunnel shortly after departing Newport with the 12:30 off Manchester-Piccadilly going to Milford-Haven laddering over to regain the down-fast to Cardiff 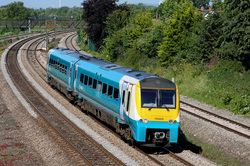 175005,a member of the 'Coradia' class wearing the now universal Arriva colours passes Undy going northwards.Not sure what working was as timetable was in some dissarry due to the Severn-Tunnel being closed for emergency safety checks.Hence trains were all to 'cock' and at times non-existent for long periods.