These Units originally replaced the Class 73's on the Gatwick Express but didn't last long and were converted to Class 458/5
from 2012.They lost their distinctive front end during that conversion. 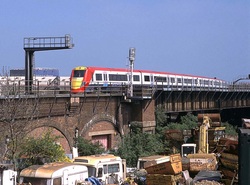 An unidentified  Class 460 'Darth-Vader' passes Latchmere Road in London with a Gatwick bound Express from Victoria.At this time majority of the services on the 'Gatwick Express' Franchise were still 'Push-Pull' 73&DBSO so seeing one of these was a novelty.Now 10 years later most of these sets have been disbanded and the coaches re-used elsewhere and the distinctive Driving-Ends no longer used.