These are narrow bodied versions on the Class 205.They were built specially in 1957-58 to run on the London-Charing Cross to Hastings line due to narrow tunnels on the route.All were withdrawn by 1986. However Unit-1001 (201001) is now preserved and is in use regularly on the National Network. Driving-Trailers 60016 and 60018 have been renumbered as 60116 and 60118 to avoid confusion with Class-60 locomotives! 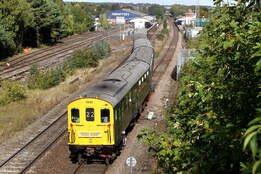 The Hastings-Unit Railtour the' Ludgershall Legionnaire '1Z21' gets away from Andover (15:30 off) running exactly to time going to its final destination--Salisbury.S60116-'Mountfield' leads with S60118 'Tunbridge Wells' sandwiching the four coaches inbetween.After a few hours break in Salisbury it left at 18:10 returning to Hastings,getting there at 22:15,4 minutes early.An example that most of the railways these days find extreemly hard to follow. 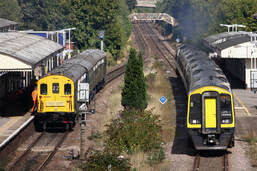 DMU- 159009 leads '1L41' the 14:20 from London-Waterloo to Exeter-St-Davids away from Andover whilst '1Z21' the Hastings Unit Excursion from Ludgershall to Salisbury waits time in the Up-Platform.S60116 was leading at this time with S60118 now on the rear. 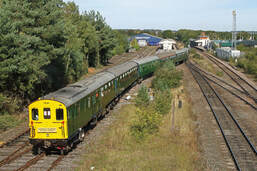 Hastings-Gauge DEMU-1001 'Mountfield' S60116 commences the final leg of the journey from Hastings to Ludgershall-Mod here at Andover Station as it ladders over to take the short branch line up to Ludgershall.The train '1Z20' left Hastings at 07:55 this morning via a very circular route via the B&H finally arriving at Ludgershall at 13:46,nearly a 6 hour journey!
..14 september 2019.. 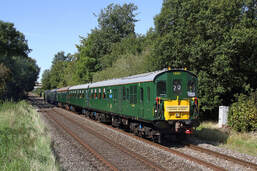 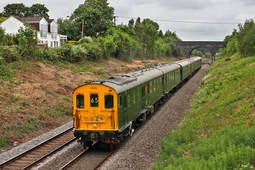 Hasting Unit '1001' in 4+2 maggot-formation speeds down the Frome Avoider at Styles Hill in incredibly dull lighting conditions with '1Z85' the 06:42 from Hastings going down to Paignton.c/w its 'South Devon Coaster' headboard. 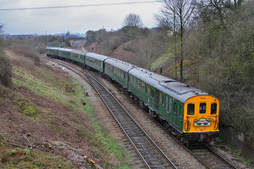 This 'Thumper' Railtour '1Z84' today ran from Hastings (08:00 off) going to Hereford.Here seen with S60116 leading and S60118 on the rear passing over Hawkeridge Junction to gain access to the line going to Bristol having just come off the B&H from the London direction. 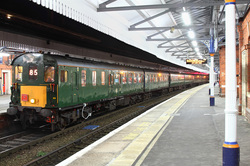 '1Z85' the 'Salisbury Star 2' railtour stands in platform 4 at Salisbury almost ready to depart on its return journey to Hastings.Note the central door locking supervisory lights are still lit indicating the slam doors are still available for use by any latecomers! Motor coach S60118 'Tunbridge Wells' is leading with S60116 'Mountfield' on the rear of this CL-202 Hasting-gauge DEMU.Note the use of a standard gauge carriage in amongst the train-set to increase capacity.This shows just how narrow these CL-202's really were! 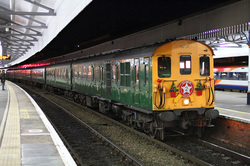 This is the ECS '5Z85' from Salisbury T&R.S.M.D to platform 4 in Salisbury Station.Having reversed outside the station at Signal Sy215 it is seen here coming to a halt in readiness to form the 17:10 the Hastings from here as '1Z85'. The name of this tour is the 'Salisbury Star 2' but unfortunately the headboard will be on the rear end for the return journey,albeit in the darkness.This motor-coach on Unit-1001 is S60116 'Mounfield' and carries the later 'all over' style of yellow warning panel.It is quite nice that both styles are carried on this set,it certainly adds a bit of variety to the pictures! 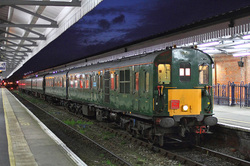 Salisbury Station is so well lit with modern flourecent lighting that occasionally it is possible to actually picture a train in the dark whilst it is actually moving! Here is the 'Hastings CL-202 6L DEMU' set 1001 headed by S60118 'Tunbridge Wells' rolling quite slowly through the old disused but still very smart platform 1 here at Salisbury.It was performing '5Z85' the 16:40 from Salisbury T&R.S.M.D to platform 4 here at Salisbury in readiness to work '1Z85' the 'Salisbury Star 2', off at 17:10 back to Hastings. Exposure was 200th @ F2 at a pretty drastic 3200asa! using an F2 35mm prime lens. 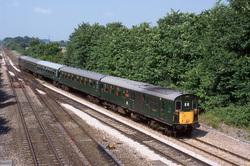 The well travelled preserved 'Hastings' gauge southern DEMU 1001 with 60000 'Hastings' leading  passes over Fairwood Junction nr Westbury with a Castle-Cary to Westbury shuttle service helping move some of the many festival goers from the Glastonbury Music Event.At this time the train was working in its 5-car 'Maggot' configuration with a normal gauge coach in the centre to enhance capacity. I doubt most of the passengers even realised what they were travelling in!