This Livery now a thing of the past.Most shots here will be during the transition period when various identities made up different sets.Power-Cars here however will aways be in I/C Livery. 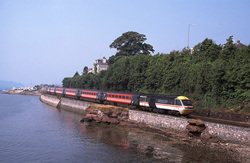 Inter-City-43099 draws a set of Virgin coaches round the curve at Shaldon Bridge nr Teignmouth in Devon on a northbound XC service.This scene gone forever now,43099 now MTU fitted 43399 working for 'Eastern'.Coaches could be anywhere? and a ridiculous H&S fence has ruined this view from the road bridge.Funny how the railway worked quite happily for over 150 years without the need for such OTT fencing until some jobsworth decided to try and justify his overblown salary!
..31 july 1999.. 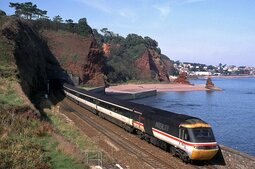 Odd combination liveries are nothing new on First Group operated HST's.Here is an original Inter-City liveried 43181 hauling a set of the then new Great Western Green/Cream sets.I have to say a much more pleasing look than the current incarnation of plain dark Olive-Green!The working is going west obviously from Paddington but destination not known.Now in 2017 a single Power-car has been repainted in this style as a homage to the class before being replaced by IEP's(Whatever they are).Also this location is now inaccessible, being well fenced off with the dreaded 8ft high spiky palisade fencing! 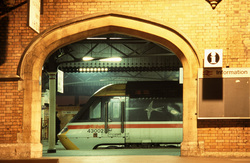 Doyen of the production HST-Fleet 43002 stands in Bristol-Temple Meads having just arrived on a service for London Paddington. 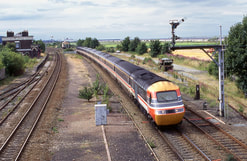 Now this is a bit of a rarity! For just a very short period this unofficial livery was running on 43028.I think it was some thing to do with the 'Irish Rail' An .However it was removed within days so pictures of it are probably quite rare.I certainly only ever saw it just this once here at Holywell-Junction on the North-Wales Coast with a Holyhead to Euston service.This location still showed remnants of the 4-track section that was so necessary a few years before to cope with all the traffic this line then produced.