Built from 1988.A total of 117 sets in service.manufactured at BREL-York. 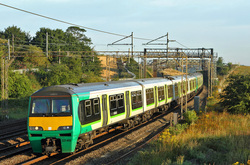 EMU 321415 operated by London-Midland runs down past Old Linslade with '2K04' the 06:19 Milton Keynes to Euston service.These 'out of favour' Units are only used during the peak service hours here on the WCML.By the end of the year all these 321 train-sets (411-417) used by LM are due to be transferred to Scotland to work for the Abellio-Scotrail  Franchise. 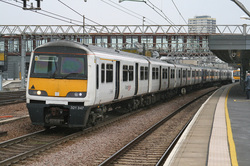 321347,another 'Dusty Bin' this time in a plain white colour scheme albeit branded for Greater-Anglia' moves away from Stratford going into the City.
​
​ ..23 february 2013.. 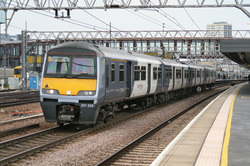 321329 in the later 'Greater-Anglia' livery gets away from stratford going to Liverpool Street. Apparantly these Units are known as 'Dusty-Bins' due to the Class-Number 321 after an Quiz Show character!