A selection of the still reasonable variety to be seen on todays railways.
A good sunny year mainly with record sunshine during the summer months.Sadly the GWR IEP's had by the years-end  replaced the venerable Class-43's/HST's . 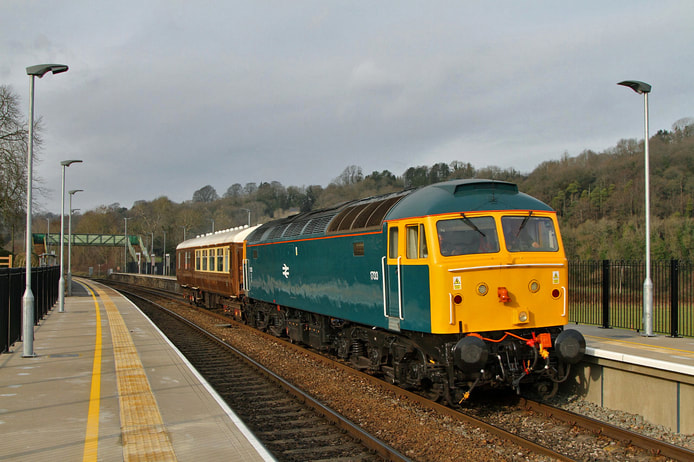 Locomotive Services Ltd owned Class-47 1733 or 47853 if you prefer, today worked '5Z80' the 08:19 from Crewe H.S taking Mk-2 Brake Coach 17080 owned by Statesman Rail down to Eastleigh-Arlington (ZG).Here seen running at quite a speed through Freshford in the Limpley Stoke Valley in an extreemly fortunate burst of 'almost' full sunshine.Any chances of sun looking up at the skies 30 minutes before would have been dismissed out of hand! 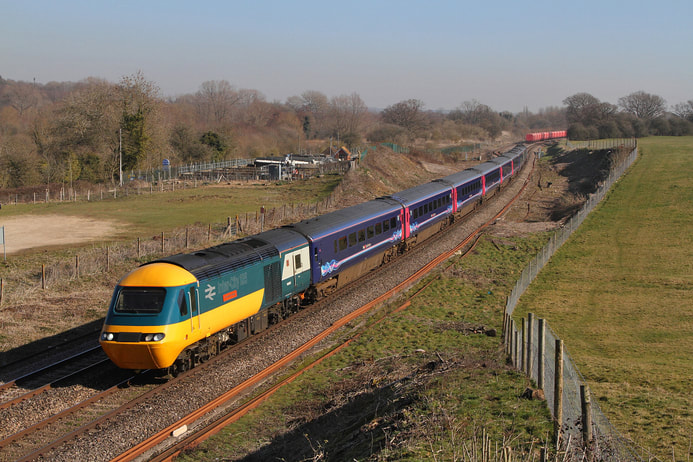 43002 is now back in service after a period 'oos' for some maintenence to be carried out.It appears to have had a bit of a paint 'refresh' as well losing the old set-number 253001 on the nose in the process. Anyway here is 43002 speeding across Hungerford Common working the 12:03 from Paddington going down to Taunton '1C50'.These short distance trains being part of the plan supplying service to Taunton whilst the line west of Taunton at Whiteball Tunnel is closed to all traffic. 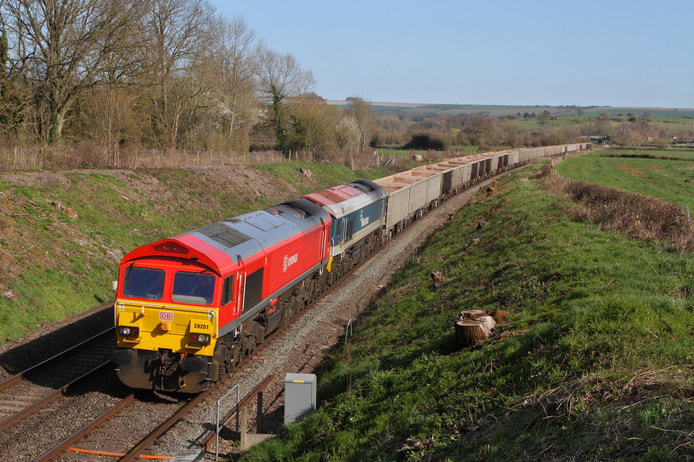 59201 & 59101 head todays '7C77' the 12:40 from Acton-TC back down to Merehead.Seen nr Great Cheverell.The entire consist was boxes and no hoppers whatsoever.Quite an indication of the changes in flow patterns in and around London. 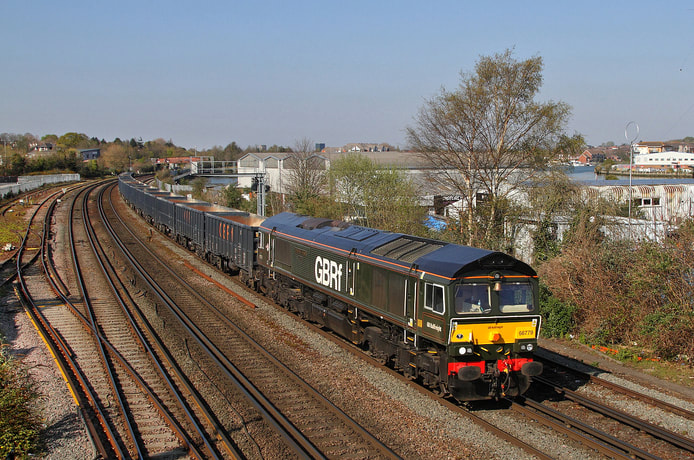 Here is (for me) the rather elusive 66779 'Evening Star' that has for the previous 3 days worked this train '4Y19' the 12:30 from Mountfield Sidings to Southampton Western Docks empty boxes to collect a load of Gypsum.A cold day but the 120 mile round trip down to here on my motorcycle was well worth the effort! 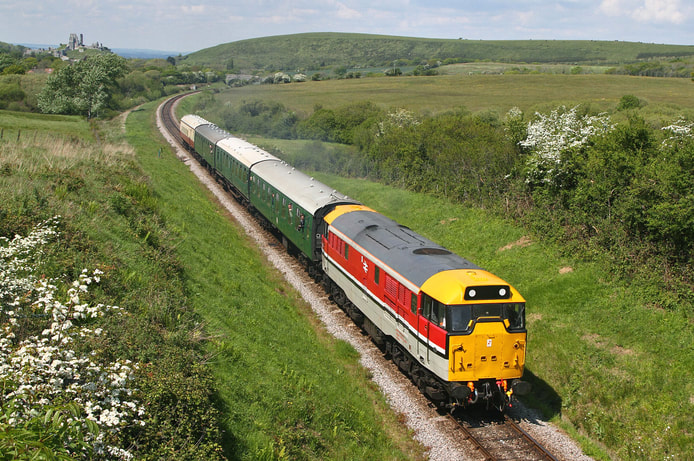 31163 disguised as 97205 in Derby Rail Technical Centre's livery passes over Corfe-Common with a train bound for Swanage on a day of virtually unbroken sunshine!  Well that had to happen sooner or later didn't it? 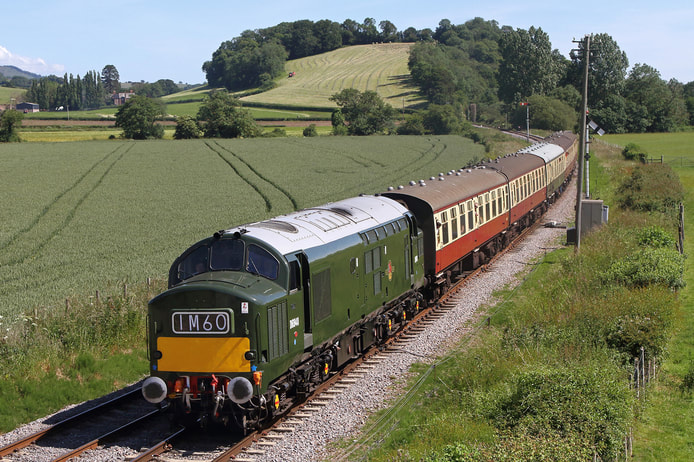 For me the star of this years Diesel-Gala here on the West Somerset Railway was this immaculate restoration by the Growler Group on the G&W-Rly D6948 (ne-37248).Here it is viewed approaching Williton in the now almost cloudless late afternoon after a rather indifferent morning and early afternoon cloudwise! The working was the 14:54 from Bishops Lydeard to Minehead. 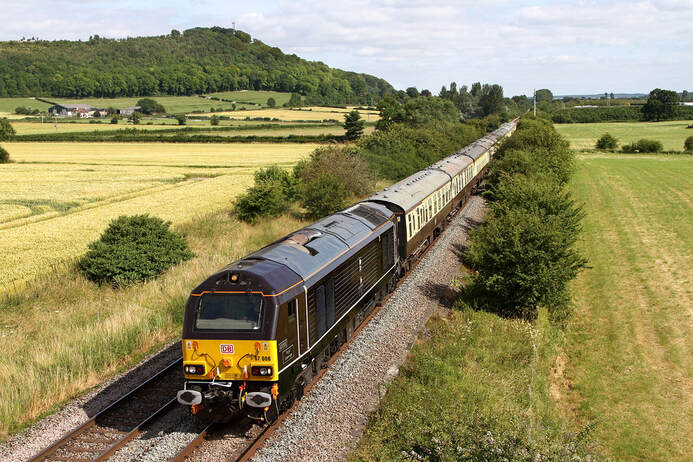 The immaculate 67006 'Royal Sovereigh' today had the job of taking the ECS for tomorrows steam excursion using 60163 'Tornado' from Bristol to Tenby to Bristol-TM in readiness. Here is that ECS '5Z18' the 15:21 away from Eastleigh-Arlington (ZG) passing  a lovely sunny Arn Hill nr Warminster .I saw this train held in the distance up in Warminster for about 5-minutes thus it coincided when it got on the move again nicely with a brief patch of clear blueness-which was nice! 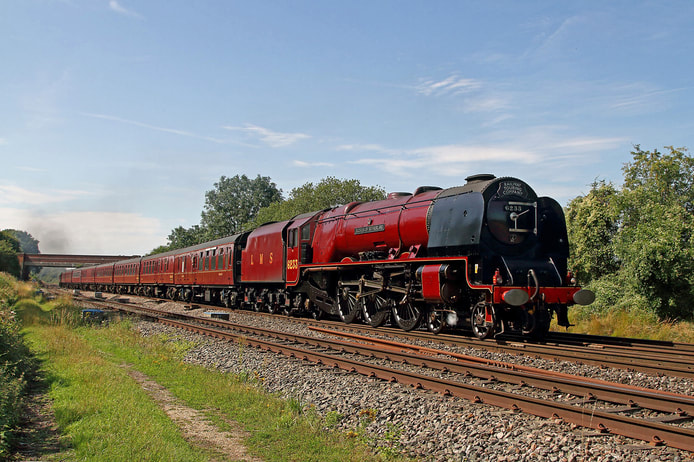 ​The LMS-Pacific 'Duchess of Sutherland' 6233 comes off the Golden Valley Line from the Swindon direction at Standish Junction with '1Z24'  The Cotswold Venturer which departed Paddington at 07:40 bound for Worcester Shrub Hill.A very warm day which explains the total lack of steam (condensed water vapour) coming from the exhaust even though it was accelerating hard over the junctions reverse curves.Pictured from a public foot crossing.
..24 august 2019.. 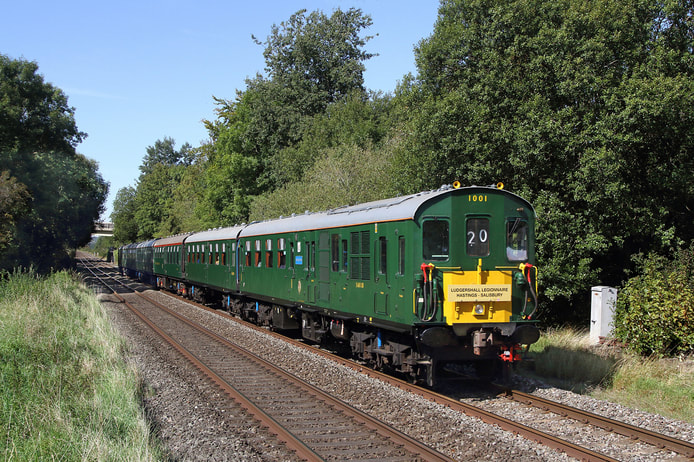 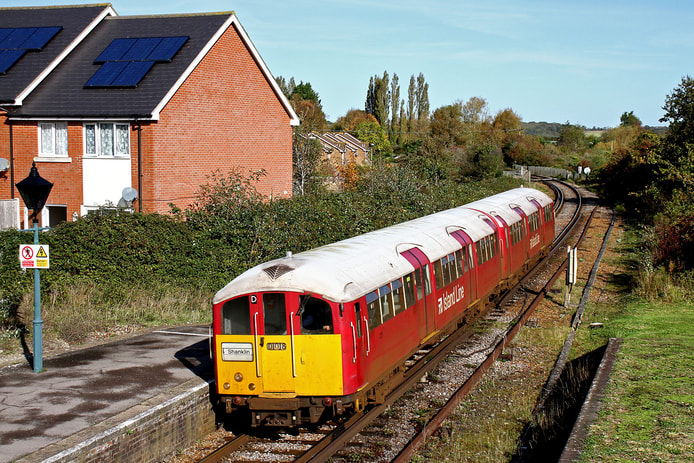 483008 arrives at Brading with '2D23' the 11:07 from Ryde Pier Head to Shanklin.Only 4 units of this now ancient 1938 built stock on the IOW remain in use.Service with these old stagers will stagger on until they are replaced in 2020 with another batch of refurbished albeit much newer Ex-LT underground stock. 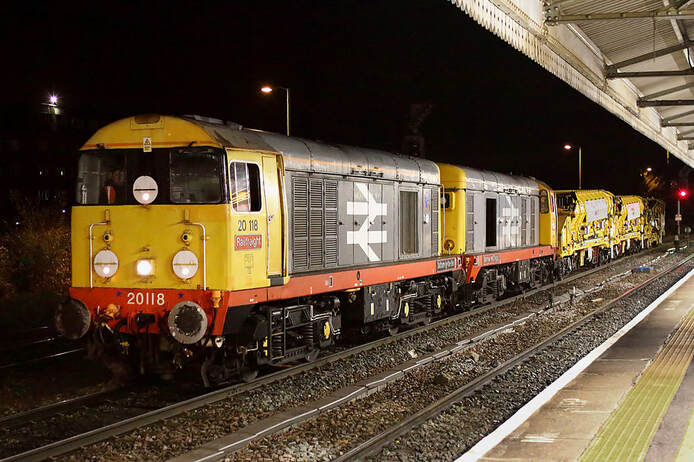 20118 'Saltburn on Sea- annd 20132 'Barrow Hill Depot' slowly rumble into Westbury with '6Z20' a VSTP working from West Ealing Plasser Sidings (18:34 off)..A lovely unexpected working this that has brought a pair of 20's here for the first time in many many years on a freight revenue earning service.The lighting here is so good that it was possible to picture this train that was still in motion hand-held using my EOS 7D Mk-1 at 6400-iso and 125th-sec @F2.5 on a F2 35mm Canon lens. In years gone by use of an old SLR type film camera loaded with reversal film would have been impossible.Exposures of 4 secs at least necessary because of very slow film iso ratings! 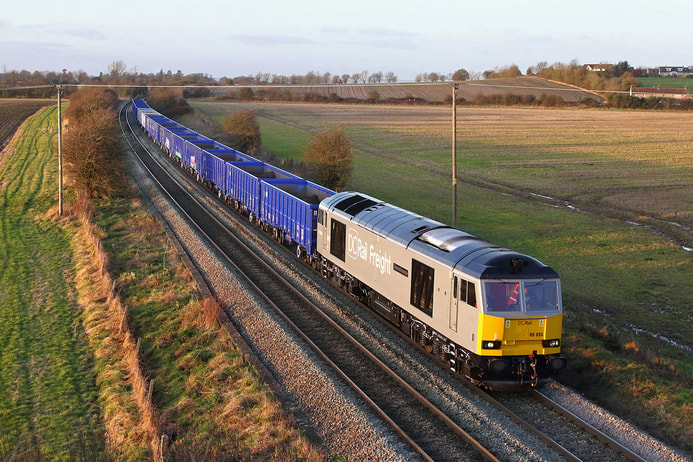 With the stone flow from Westbury Down-TC to Southampton Up yard restarting again DCR wasted no time in allocating their brand new acquisition 60055 that is freshly out of a refresh/overhaul at Toton after languising in store for many many years! Now in its new DCR colours 'Thomas Barnado' is viewed at Arn Hill nr Warminster just on the cusp of sunset with '6Z91' the 15:24 from Westbury going to Southampton Up Yard with a load of ballast that is to be recycled there.Nice to see the 'Voodoo Tug' back in use after so many years inactivity!