Usually operate out of St Pancras but occasionally seen on other routes out on hire. 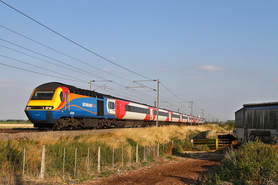 Another 'Hire-In' to 'Virgin Trains-East Coast' is this pair of 'East Midland Trains' Power-Cars 43059 & 43061.Here making a very colourful sight passing Claypole working '1H10' the 17:19 from the 'Cross' going up to Hull.I wish we had a couple of these P/Cs working down the B&H to Cornwall.That would certainly make it well worth revisiting several well used locations on that route for a few shots that is for sure! 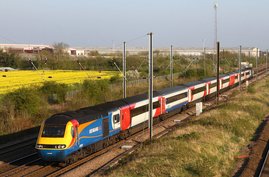 here was an interesting 'Hire-In'.East Midland Trains 43089 works a mainly Virgin set of coaches with just one EMT-interloper.EMT 43082 was on the rear.The train was '1H10' the 17:10 from London-Kings Cross
going to Hull.Viewed at Marholm north of Peterborough in the superb evening lighting! 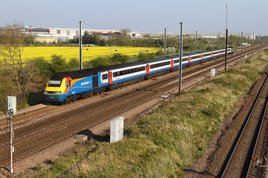 This is an East Midland Trains ECS from Nottingham (16:11 away) to Derby Etches Park.The report number being '5Z43'. It passed this location twice within 20 minutes as it reversed in Peterborough to continue onwards to Derby.lead PC was 43059 with 43073 (seen here) on the rear.Set number incidentally was NL12.Location is Werrington-Junction. 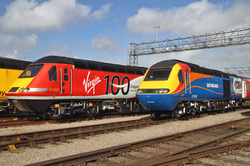 43300 'Craigentinny-100 years 1914-2014' stands next to 43048 'T.B.C Miller-MBE illustrating just how colourful and attractive these 40 year machines can look with a bit of imagination.Something the design team of the GWR-Franchise are seriously lacking in judging by the pathetic apology of a livery the new GWR-Colour is! 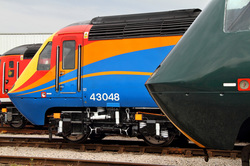 43048 is a colourful East Midlands Trains HST Power-Car.It carries the name 'T.C.B.Miller-MBE' who was a BR Chief Engineer(Traction & Rolling Stock) who was credited with instigating the development of the Inter-City-125.Here it is standing in the line-up of various liveried HST-Power-Cars at St Philips Marsh Open-Day Exhibition. 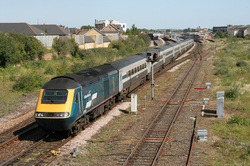 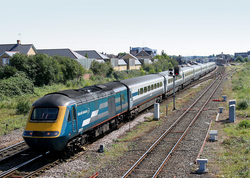 43007 heads a 'Hire-In' for Virgin for the Summer Saturday holiday traffic down to the Cornish Riviera.Seen departing Taunton from 40-steps bridge. 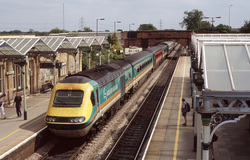 A mixture of old and new MML liveries with some Virgin mixed in make up this southbound HST heading for St-Pancras.Here seen departing Loughborough on a Sunday afternoon. 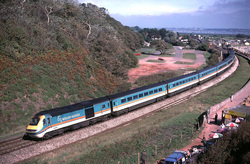 Carrying the original Teal and Cream colours of the MML-Company 43050/43053 combo rounds the curve at dawlish with a Summer-Saturday working from the Midlands.As usual,older liveries always seem far nicer in retrospect!