TomCurtisRailGallery
﻿Just 'CLICK' the thumbnails for a fullpage image! (1280+853 nominal) ﻿
From Autumn-2017 some Units are now operating on Paddington to Bristol and Paddington to Swansea services.
The numbers are set to increase as more get commissioned.
​Several sets are currently out on mileage accumulation testing most days on The GWR. 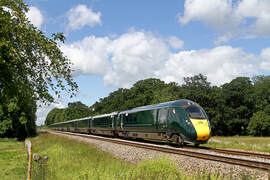 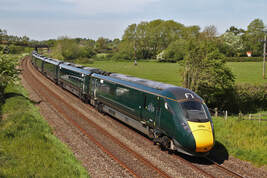 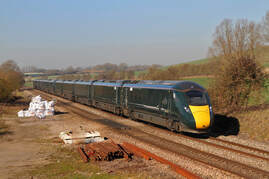 Here is a Pile of Plastic from Hitachi that is now taking over most of the former HST duties on the GWR.Only a couple of months at most and these Class-800's will have superceeded the venerable HST's for ever!
802015 paired with 802007 form a 10-car working the '1A76' 09:20 from Taunton to Paddington.Seen at Grafton East Jn at Crofton off the buttress of a long disused occupation bridge that had its 'bridge' decking removed a year or so ago. 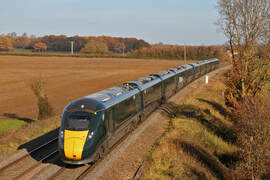 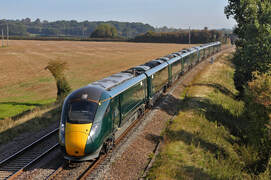 Here is my first sighting of a Paddington to Plymouth service via the B&H being operated by a couple of Hitachi-Plastic-Pigs.This pair being from the '802' series nos 005 & 003.Seen here at Berkley Marsh nr Frome working '1C76' the 09:03 from Paddington to Plymouth.
General concensus is that by mid-November these trains will be 100% IET's. A pity. 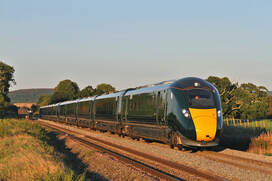 With the sun sinking fast in the west this IET-combo 802005/802003 passes Witham Friary working '1C89' the 16:33 from Paddington to Exeter. All very clean and shiny,it probably has only been in service a few days. 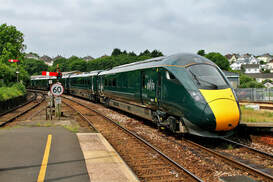 800201 on'5X91' the 11:07 from Penzance to Exeter St Davids rolls into Truro on the training run.The 800-Set stops,the guard gets out,looks up and down and then gives the 'right-away'.All good practice for revenue earning service due to commence in about 5-weeks time.All done under the control of century + old semaphore signals-Now there's a paradox! 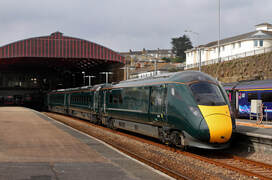 IEP-800201 stands in the terminus at Penzance ready to work '5X91' the 11:07 from here to Exeter St Davids test-run.A scene that in the years to come will become all too familier unfortunately. 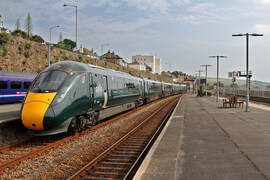 With service trains from Paddington to Penzance via the B&H set to start changing over to IEP operation in the middle of next month test trains are now running regularly in the far west presumably for driver familiarisation/training. So here is 800201 rolling into Penzance with '5X89' the 07:05 from Laira to Penzance. 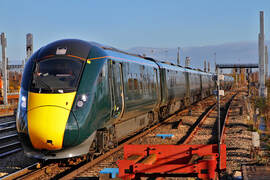 For me this shot is quite significant because it is my first sighting of an 800/2 version of the IET trains now being dragged into service on the GWR.These versions were designed particularly for use down to Cornwall from Paddington where 80% of the mileage (give or take) will be under diesel power.The engines are therefore 940hp each instead of 750.Also the fuel tanks are rather bigger to (hopefully) cope with the long long journey distances.This pair 800201 & 800202 are seen passing Swindon on test from North Pole IEP Depot down to Taunton as '5Z19'.Note no GWR-logo's are as yet applied!